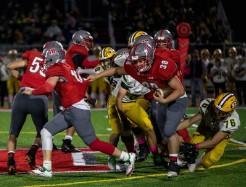 
Our Hilltopper student-athletes have wrapped up the fall sports season, and we would like to express our appreciation to our players and coaches for their numerous team and individual accomplishments in the extremely competitive Laurel Highlands Athletic Conference.


It was also a season of new beginnings, as our student-athletes and fans got to experience the “Jewel of the Hilltop” with the inaugural football and soccer contests played at the newly renovated Price Field.


Coach Mike Harchick’s boys’ runners finished the year with a stellar 9-1 record.  The Hilltoppers captured championships in the Big Valley Invitational and Altoona Invite meets.  Seniors Derek George and Eli McCoy advanced to the PIAA State competition and made their mark, as George finished 27th and McCoy 73rd out of 266 total runners.

The girls’ cross-country squad compiled a 2-4 overall record for the season.


Under the Friday Night Lights at Price Field for the first time in school history, the varsity football squad led by Coach Pat Barron posted a record of 4-6.

The historic season opener electrified a sellout crowd with a thrilling finish, as the Hilltoppers battled back from an early two-touchdown deficit and a lengthy rain delay to defeat Central Cambria 21-19.


Another never-say-die effort by the Hilltoppers later in the season saw Westmont Hilltop trail Forest Hills by as many as 13 points with less than ten minutes remaining before storming back for a 28-27 victory over the Rangers that was up for grabs until the final seconds.


The Hilltoppers concluded the campaign on a high note at home with a 35-21 triumph over arch-rival Bishop McCort.  Senior running back Gavin Hockenberry was the catalyst for the Hilltopper offense, finishing with 1,297 rushing yards and 15 touchdowns.


The Hilltopper girls' tennis team continued its tradition of excellence this year.  Coach Dan Fregly’s squad posted an overall record of 12-6 and earned a berth in the District 6 title match for the 11th consecutive season before unfortunately falling short against Central Cambria.


Seniors Glenn Stutzman and Landrey Burnheimer each qualified for the District finals.  Stutzman was Westmont Hilltop’s low medalist at the finals, shooting an 88 to finish tied for 13th place.  Sophomore Caden Miller shined at the Laurel Highlands Athletic Conference individual championship, posting a score of 79 to finish 5th.

Mullen compiled a standout season with a pair of individual championships.  Mullen captured the Laurel Highlands Athletic Conference girls’ title after shooting a 96, and she tallied that same score to finish atop the leaderboard at the Ebensburg Country Club Invitational.


The Hilltopper boys’ varsity soccer club finished with an 8-11 record, but coach Jason Hughes’ team was able to earn the fourth seed in the District 6 Class 2A playoffs and secured the opportunity to host the first-ever night postseason soccer game at Price Field.  Unfortunately, Juniata pulled out a 3-2 overtime win to prevent the Hilltoppers from advancing to the semifinals.  Eli McCoy and Maximus Zitnay have been chosen to play in Santa Fund All-Star Classic


Coach Curt Lichtenfels’ girls' soccer team posted a record of 7-11.  Morgan Faight and Mackenzie Kozak have been chosen to play in the Santa Fund All-Star Classic


Westmont Hilltop’s girls’ varsity volleyball team had a successful campaign, as coach Denise Nairn guided the Hilltoppers to an 11-7 record and a spot in the District 6 Class 2A playoffs before a down-to-the-wire five-set loss to Central Cambria ended the season. Senior middle hitter Carissa Krall concluded her stellar career by setting a new school record for blocks and also reaching the 500-kill milestone.